Food is heterogeneously distributed in space and time. Animals, from wildebeests to soil nematodes, have to make important decisions when foraging. For example, they have to establish when it is a good time to leave a food patch and then choose where to go from it.

I studied the factors driving these important decisions using the model nematode Caenorhabditis elegans and bacterial assemblages as model system. The reasons that make this a particularly suitable system to examine foraging-related questions are: 1. worms feed on bacteria and in the natural habitat of C. elegans - rotten fruits and stems - bacteria are patchily distributed; 2. worms can guess whether a patch is colonized by other worms thanks to the suite of pheromones they continuously release in the environment.

We experimentally showed that worms consuming a food patch leave it at different times and that the leaving time affects C. elegans preference for pheromones. In particular, worms leaving early are attracted to pheromones, while worms leaving later are repelled by them. We further discovered that the inversion of pheromone response is driven by associative learning, whereby attraction or repulsion depend on the association of pheromones with food presence or absence, respectively.

Finally, by implementing a simple model, we highlighted that worms, by changing their pheromone preference while feeding, are able both to find rich patches and to avoid already exploited ones, ultimately optimizing their food intake during foraging.

Read the story here and soon on eLife.

This project has been done in collaboration with Alfonso Pérez-Escudero and Frank Schroeder. 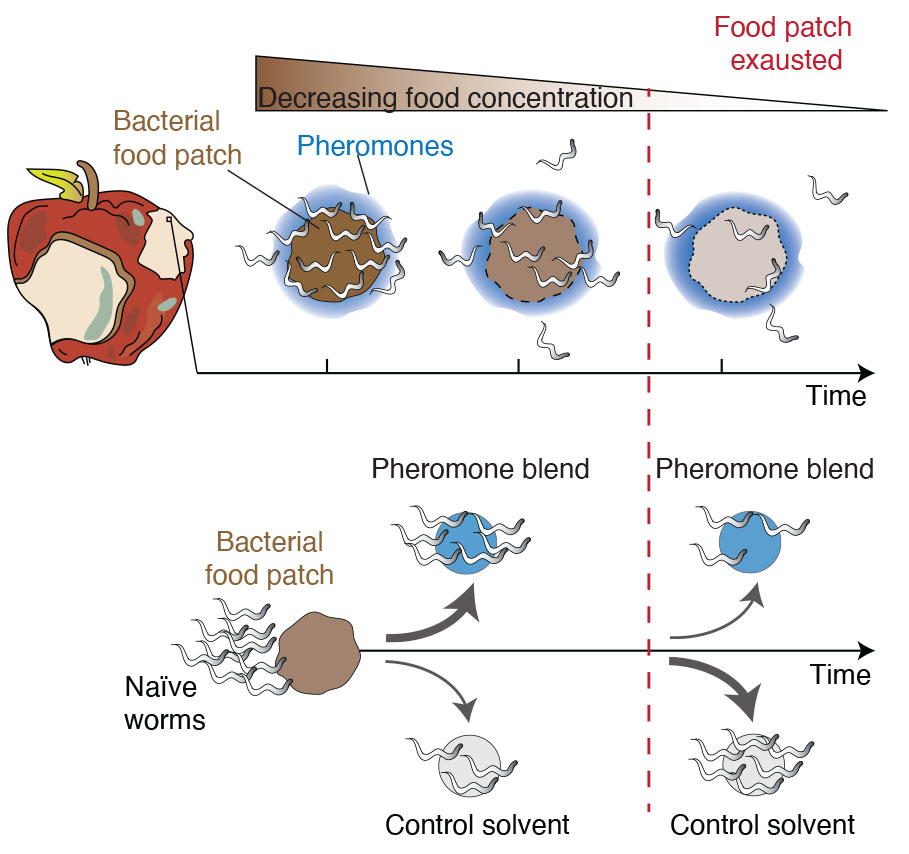 Schematic of one of the experiments described in our paper.